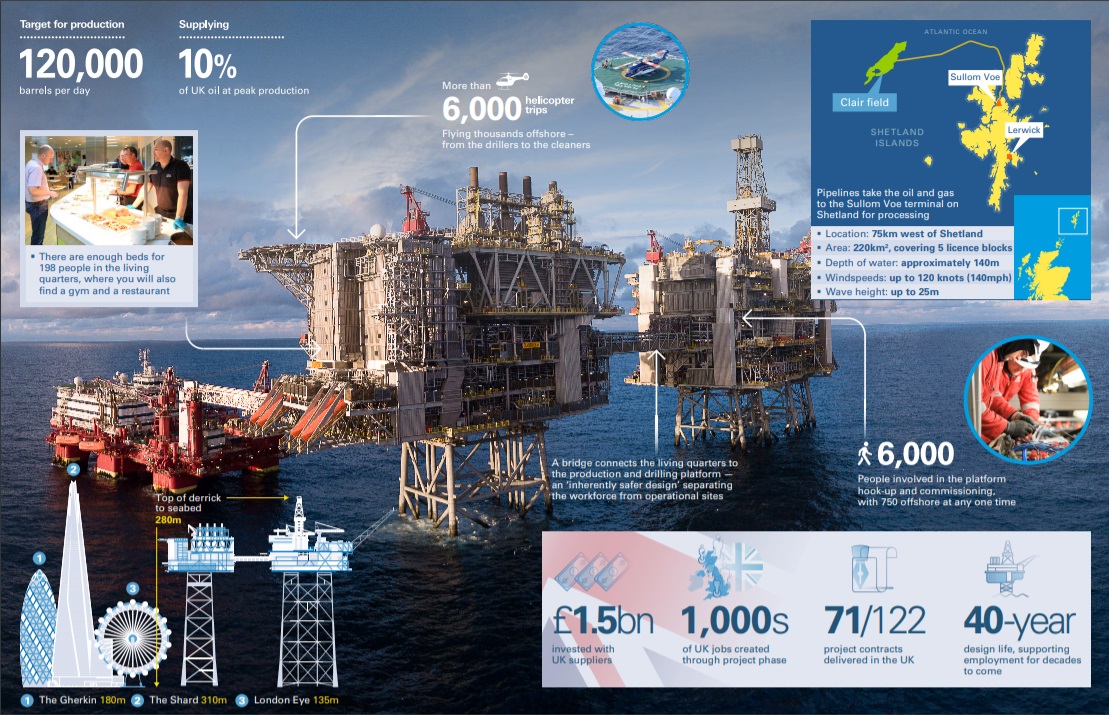 Oil from BP’s major Clair Ridge development which is expected to produce for the next four decades – has begun to flow.

The Clair field, west of Shetland, was discovered in the 1970s.

Two new bridge-linked platforms and export pipelines will be used to recover an estimated 640 million barrels of oil at Clair Ridge.

The start of production is seen as a significant moment for the UK’s oil and gas sector.

As decommissioning ramps up in the North Sea, the north east Atlantic is seen as the new frontier in oil exploration and production.

The Clair field – 47 miles (75km) west of Shetland – was discovered in 1977 and is estimated to contain seven billion barrels of oil and gas.

Clair Ridge is regarded by BP as one of its key assets, particularly since it sold stakes in several other fields last year.

The company said new platforms and pipelines required investment of more than £4.5bn.

It is the second phase of development in the larger Clair field, where the first phase began oil production in 2005.

Bernard Looney, BP’s upstream chief executive, said: “The start-up of Clair Ridge is a culmination of decades of persistence.

“Clair was the first discovery we made in the west of Shetland area in 1977. But trying to access and produce its seven billion barrels proved very difficult.

“We had to leverage our technology and ingenuity to successfully bring on the first phase of this development in 2005.

“And now more than 40 years after the original discovery, we have first oil from Clair Ridge, one of the largest recent investments in the UK.”

He added: “This is a major milestone for our Upstream business and highlights BP’s continued commitment to the North Sea region.”

“The OGA continues to view the west of Shetland as strategically important with substantial remaining potential.”

“This is another firm step towards maximising economic recovery from the basin.”

Energy Minister Claire Perry said: “The North Sea is crucial for the UK’s energy security and helping businesses maximise economic recovery there is an aim for this government.

“Aided by the innovative use of technology developed in the UK and a strong UK-based supply chain worth £1.5bn, this will allow the North Sea to continue to be a hub for the high-skilled, well-paid jobs at the centre of our modern industrial strategy.”

Oil from Clair is exported to the Sullom Voe Terminal in Shetland.