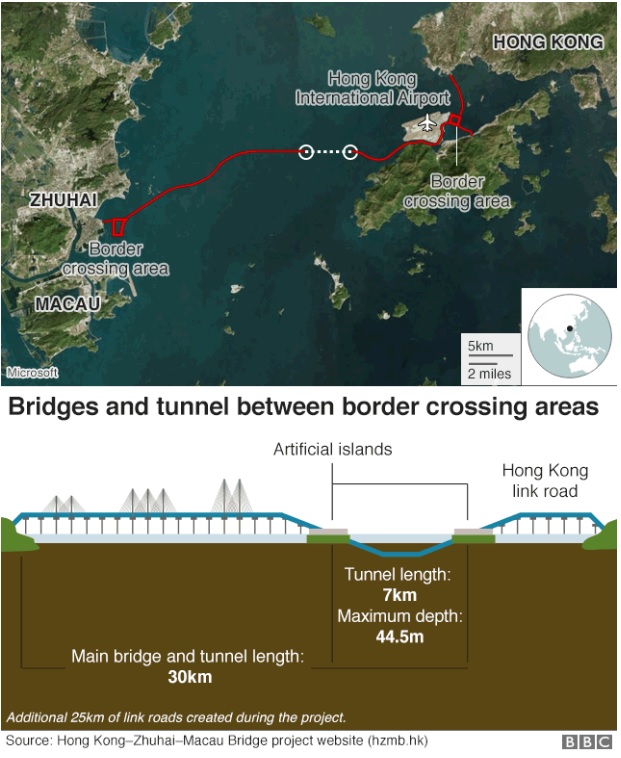 Chinese President Xi Jinping has opened a new bridge between Hong Kong and the Chinese mainland – the longest sea crossing in the world. The 34-mile (55km) bridge has been under construction for the past nine years, costs about £15bn and includes two artificial islands. Some 6.7km of the crossing runs through a tunnel underneath the sea to allow traffic through the busy shipping lane above. Designed to withstand earthquakes and typhoons, it was built using 400,000 tonnes of steel, enough to build 60 Eiffel Towers.

It has been dubbed the “bridge of death” by some local media. Construction has been dogged by safety issues – at least 18 workers have died on the project, at least nine workers on the Hong Kong side have died and officials say that nine had died on the mainland side, too.

Special cameras will be on the look-out for drivers on the bridge who show signs of getting sleepy, among other checks – yawn three times and the authorities will be alerted, local media report.

To help counter potential terror attacks, there will also be “48 high-definition surveillance cameras” mounted at intervals along the bridge as well as anti-terror police patrols, the South China Morning Post reports.

And drivers will have to change which side of the road they are on at the crossing. People drive on the left in Hong Kong and Macau but the bridge is Chinese territory and special merger channels have been built to cope with this.